skip to main | skip to sidebar

We spent the afternoon with Ray Knutsen at his vineyard and winery in Benson, Vermont. He is enthusiasm on steroids--the epitome of the garage wine mechanic. Able to leap large ideas in a single bound, he planted his first vines in the mid-seventies, going through the maelstrom of trying to bring vinifera to Vermont only to emerge years later as a sort of Guru of hybrid varietals. Based on his extensive research, trial and error, and uncompromising honesty about what can really work on a cold hilltop in Vermont instead of the Elysium slopes of the Côtes d’Or in France.

Ourselves being Vermonters for 30 plus years (don’t say that to a local) our first question was what we thought the obvious one: “How much cold can these guys handle?”

Answer: “40 below.” Ray nosedives his hand and then levels off. ”No vines like a major change from say 20 degrees to 30 below, but these Minnesota hybrids do fine here.”

But it’s not the bigger deal here in Vermont this year. What is, is rot, WEATHER, rain, mold, mildew, numerous fungi. The University of Minnesota being the vanguard of hybridizing vinifera so places like there and here can grow grapes and make wine. We suspect they are working on fungi after Ray animates the plucking of weaker strains from the test beds.

Free association now from Ray, a vortex of information on lessons learned in Minnesota, the dizzying number of vines tested each year, their process of elimination, the how’s and why’s of The University of Minnesota’s snail pace when it comes to releasing new hybrid grapes. I mean we are mortal, so if you want to get a leg up and move forward in the Vermont wine world you may have to live to be 200!

We try some Le Crescent out of one of the stainless tanks, reminiscent of Riesling, but a bit edgier, with less of the petroleum nose we’re used to in some European Rieslings. Clean, tight, a food wine as they say. Then we spit and miraculously the three of us all begin to crow about chewable, flabby, cream-soda-like, monster, American Chardonnays with alcohol levels that could kill off a sumo wrester after two sips. And they are not all cheap wines!
Posted by Linda & Ted Fondulas at 9:05 PM

In your browser window copy and paste this link to our new, improved blog at Odyssey Events VT https://www.odysseyeventsvt.com/ricottadiaries 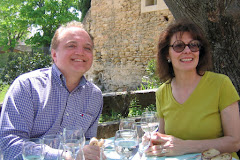 Vermont, its flora, its fauna, its people, its places, and our history woven into its fabric. Vermont is living in the New World, while experiencing some of the Old. We love it.

Promote Your Page Too